Structural Innovations is capable of serving as lead investigator in diagnosing the level of damage and distress in structures after accidents (i.e. fire, water, etc…) or natural disasters. Our structural engineers take an active role in forensic structural investigations to determine the cause of a structural failure, and determining the suitability of the structure for continued use. Additionally, we will serve as an expert witness and present our findings and opinions in judicial proceedings. 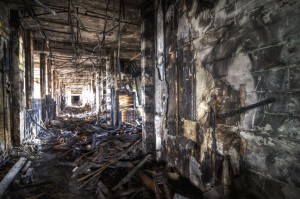 A fire originated in the baptistery area of the sanctuary at Harbor Baptist Church. The fire damaged much of the contents of the sanctuary and portions of the concrete roof structure (consisting of pre-stressed, concrete double tee joists) over the sanctuary. Subsequent to the fire, several engineers including Structural Innovations Engineering & Consulting, PC reviewed the roof structure and issued reports detailing their findings and recommendations. The findings and recommendations of the engineers were various warranting a more extensive evaluation of the roof structure.

Structural Innovations was retained by Harbor Baptist Church to oversee a testing regime that would ultimately measure the extent of fire damage to the concrete joists. Structural Innovations, working in conjunction with researchers from University of North Carolina at Charlotte, developed a two phase testing regime. Phase 1 involved performing non-destructive evaluation (NDE) of the joists via three methods with the goal of determining the amount of concrete strength degradation and reduction in stiffness that had occurred in the damaged joists. Completion of Phase 1 without detection of serious damage to the capacity of the joists would allow for an in-situ load test of the joists to verify their performance under the controlled application of gravity loads (Phase 2).